A downloadable game for Windows

Your great-aunt is out on vacation. She has left you the task of watering her plants while she is away. You have got the keys of her old manor.

But there is something else in this house...

WASD or ARROW KEYS to move

SPACE BAR or ENTER to interact

This is a submission to the Haunted PS1 Summer of Screams Jam. The theme was Architectural Horror, so here's a good ol' haunted house!

this game is fucking shit kys.

Fun concept and fits in with the architectural horror theme. Well done for a game jam!

Hey man I really liked the game, I wanted to know more about the story. A question can the game have a continuation?

Reply
Lady Random1 year ago(+1)
Not really much to say about it. I liked the creepy atmosphere and evil mirror dude. The house was also done well for the Architectural Horror themed game jam it was part of... Can check out the video if interested but, I did not get the second ending.
Reply
dead3031 year ago
GAMEPLAY WALKTHROUGH (POSTED FOR LAST TIME)
Reply
RavencrowProductions2 years ago

My video on Belladonna.

Short little game. Has kind of a creepy vibe to it but nothing actually happens and it isn’t scary. I enjoyed it though.

There’s one thing about the game that I don’t like and that’s the filter that makes it look pixelated. It doesn’t look right. It looks artificial even though it’s trying to look like an old ps1 game I think. I would say to just make textures that are low res and make a game that way but who am I to say what the dev should do?

Trying to read stuff is difficult and the movement doesn’t help.

I would say that the camera angles were pretty good so it makes walking in them a bit easier but it’s still difficult to walk through some levels. Especially when you’re trying to open doors.

Was walking through the same wooden level twice really needed?

I think the mirror reflection of yourself was kind of cool cause the character had red eyes. I think it would have taken some time to actually implement that and that’s what makes it cool and stand out to me.

I like the slow pace of the game and the visuals are kinda nice like going outside to get the watering can. I thought the sky gave a gloomy look and the brown walls with some green gave a familiar feel.

I don’t think the second ending wasn't a good use of my time but the game was short enough that I could beat it within 6 mins. I guess I would say that I didn’t particularly like the second ending and I wasn’t fulfilled by it. It was a game jam game so what am I really supposed to say? These jam games are done quick and having a second ending should be a good thing. Anyways, I much preferred the first ending where you did water all the plants. Strange, I know.

Interesting game, the ambientation is very well made. My gameplay is in portuguese (PT-BR), but feel yourself praised for the good job =)

I had fun and thought it was neat!

It was alright, but really not bad for a short game jam. Wouldn't really play it otherwise

Many other people get the second ending? Made me chuckle. Really neat game, I get that it was limited but what's there is a spooky and intriguing neat little experience. Would play more like it.

Reply
SHXXTZZ2 years ago(+1)
This was a nice game the camera was a bit annoying at times but overall a good game.
Reply
jakob_reborn2 years ago(+1)

Somehow humorous, ending was very creative. Meme potential in here for sure.

I actually laughed at the black shadow part lol

It is an exciting concept with a limited execution, which I will chalk up to limitations in time. Honestly, with more of a fleshing out and a more straightforward house layout, you might be able to make a rather interesting "house gradually gets spookier the longer you are in it" style game. Doing menial chores and generally just taking care of the place.

The pacing felt pretty spot on, and the game looks refreshing. The only major downside is, of course, the lethal hardware the character calls his legs, felt like I was playing resident evil.

Cynicism and plant mistreatment below.

hi, big thx for the game. greetings from rosti 😀

A spooky and nice experience!

YOUR GAME WAS THE FIRST I PLAYED

Thanks for playing my game! I'm glad you enjoyed it.

Thank you! I loved the commentary in your video.

Thank you for playing! 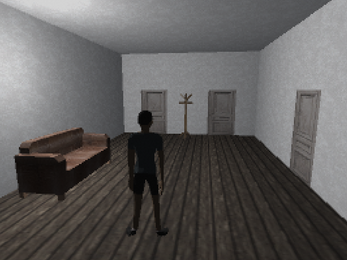 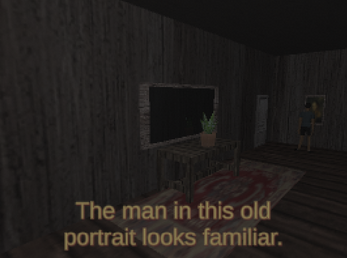